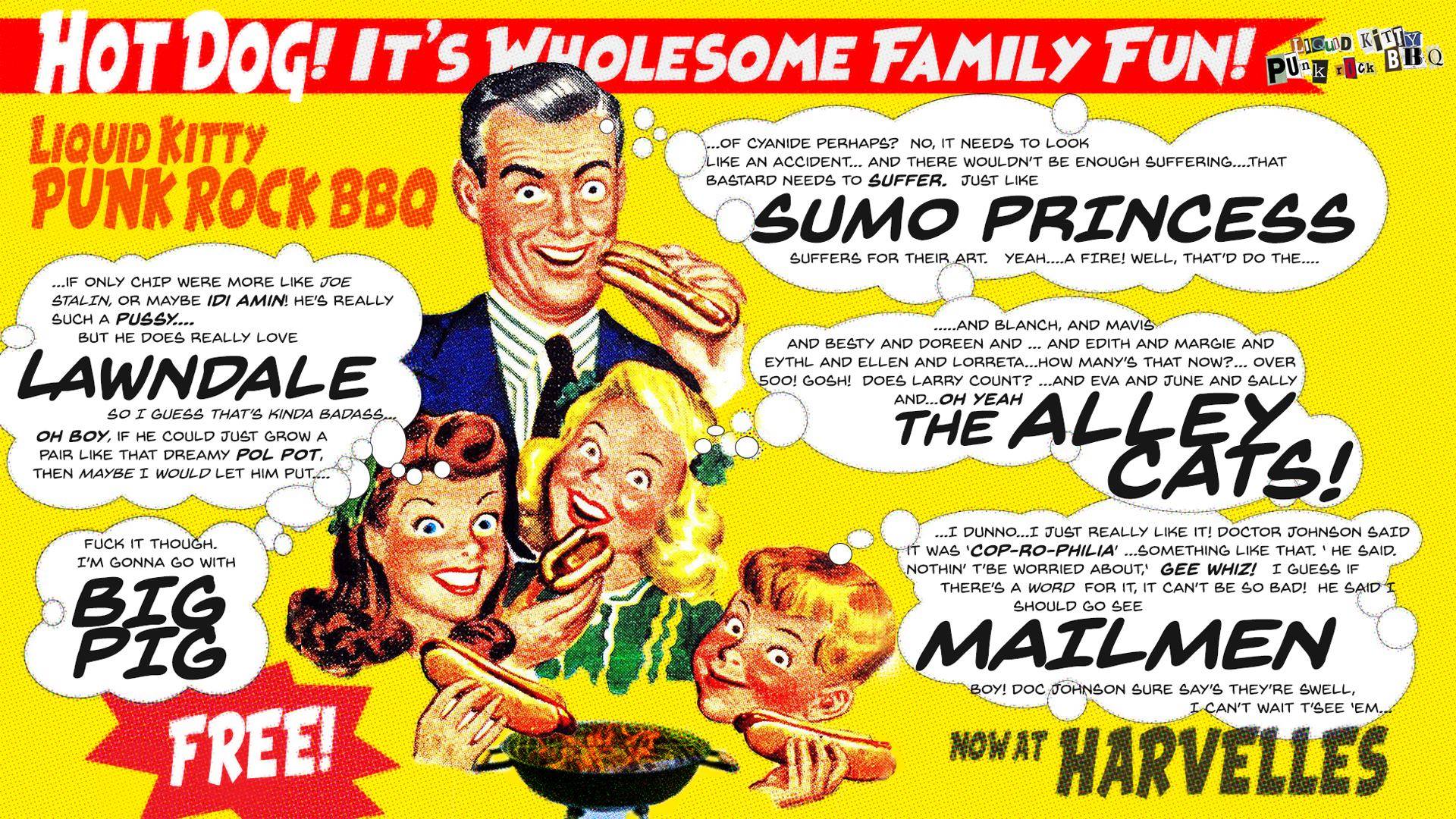 Friends, the Kitty may be gone, but the Liquid Kitty pUnk rOck BBQ is back! Two former Liquid Kitty employees, Damian and Jason are now part owners of Harvelle’s in Santa Monica and are running the place. For some reason they’re letting me do another BBQ over there. So get down there and don’t disappoint!
Harvelle’s is located at 1432 4th Street Santa Monica, CA 90401.

4:00pm: THE ALLEY CATS
The Alley Cats are truly one of the best bands from the formative days of Los Angeles punk rock. Formed in the mid-1970s, their early singles on the Dangerhouse label are truly among the best punk rock records ever produced. Songwriter/guitarist/vocalist Randy Stodola also fronted the Zarkons and then reformed the Alley Cats several years ago. (Randy Stodola guitar/vocals; Apryl Cady, bass, vocals; Matt Laskey on drums )
https://www.facebook.com/AlleyCatsSOB

3:00pm: LAWNDALE
During their brief but prolific run in the mid 1980s, the all-instrumental LAWNDALE was a fixture on L.A.’s second wave punk scene. Playing a unique form of what has been described (possibly by a psychotic) as ‘Surf-infused Psychedelic Melodic Acid-Prog’, the band was fittingly dubbed “the Instrumental Gurus of the Church of the Electric Guitar” by the LA Weekly.”…if you have any fondness for early ’60s instrumentals … and care to see it done superbly plus a demented tinge of Pink Floyd influence, this is the band” – Stone Age News
(Jack Skelley, Steve Housden, Dave Childs, Philo Van Duyne)
http://thelawndalesound.com
https://www.facebook.com/Lawndale

Harvelle’s (1432 4th St Santa Monica) is located only 1500 feet -a six minute walk- from the Expo line stop at 5th and Colorado. If you’re driving, there are many public lots, including one two doors to the south of Harvelle’s. Street parking is usually available on Arizona (a few blocks north of Harvelle’s) between 4th and Lincoln. If all else fails, park east of Lincoln.